In 1975, Gruene was placed on the National Register of Historic Places as an entire district.  Originally settled in the mid-1840s by Ernst Gruene, a German immigrant, and his bride Antoinette, the town would originally be known as “Goodwin”.  In 1903, the community was renamed “Gruene” in honor of their son Heinrich “Henry” D. Gruene in honor of all his many business endeavors which grew and supported the local economy.

Among those endeavors were the Gruene Cotton Gin, a mercantile store (now known as “Gruene General Store”), a school, a lumber yard, another store that also served as a working bank, and perhaps most famous of all a dancehall simply known as “Gruene Hall”. 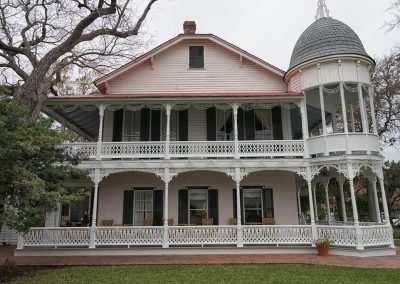 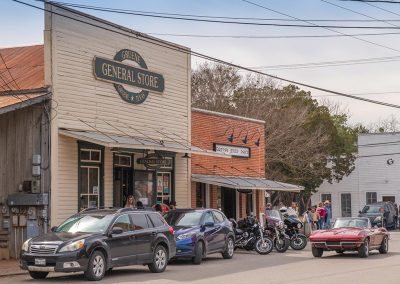 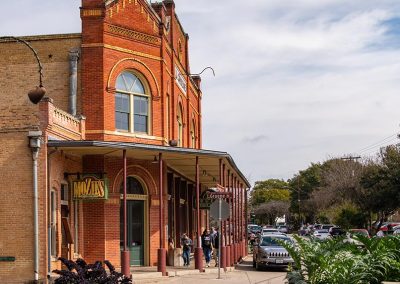 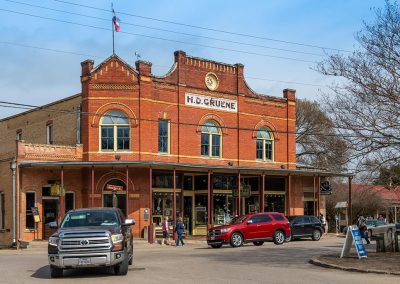 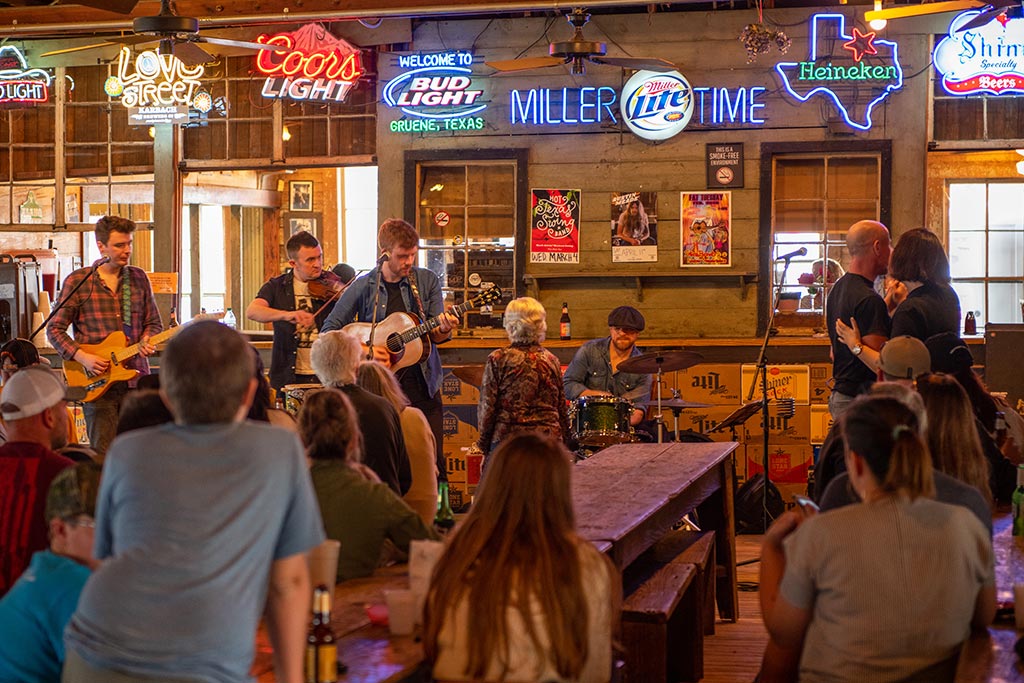 Gruene Hall was built in 1878.  It is Texas’ oldest continually operating and most famous dance hall.  The 6,000 square foot dance hall hasn’t changed much since it was first built. It has side flaps for open air dancing, a bar in the front, a small lighted stage in the back and a huge outdoor garden.  The old hall and stage area are decorated with old advertising signs from the 1930s and 40s.

Gruene Hall has become a destination tourist attraction and major music venue for up-and-coming as well as established artists.  Pictures of hundreds of celebrities’ who’ve played at the Hall adorn its walls.  It’s been a proving ground for many former “new talents” such as George Strait, Hal Ketchum, and Lyle Lovett and has hosted musical icons to include: Little Richard, Jerry Lee Lewis, Bo Diddley, Merle Haggard, Kris Kristofferson and former “up and comers” Garth Brooks, Chris Isaak and the Dixie Chicks.  Big names such as Willie Nelson and Aaron Neville have chosen to perform in the Hall’s more intimate venue as well.

Gruene Hall’s patrons never know if the artist they see at the Hall today will be a star tomorrow, but they can know that the music they hear will always be top notch. 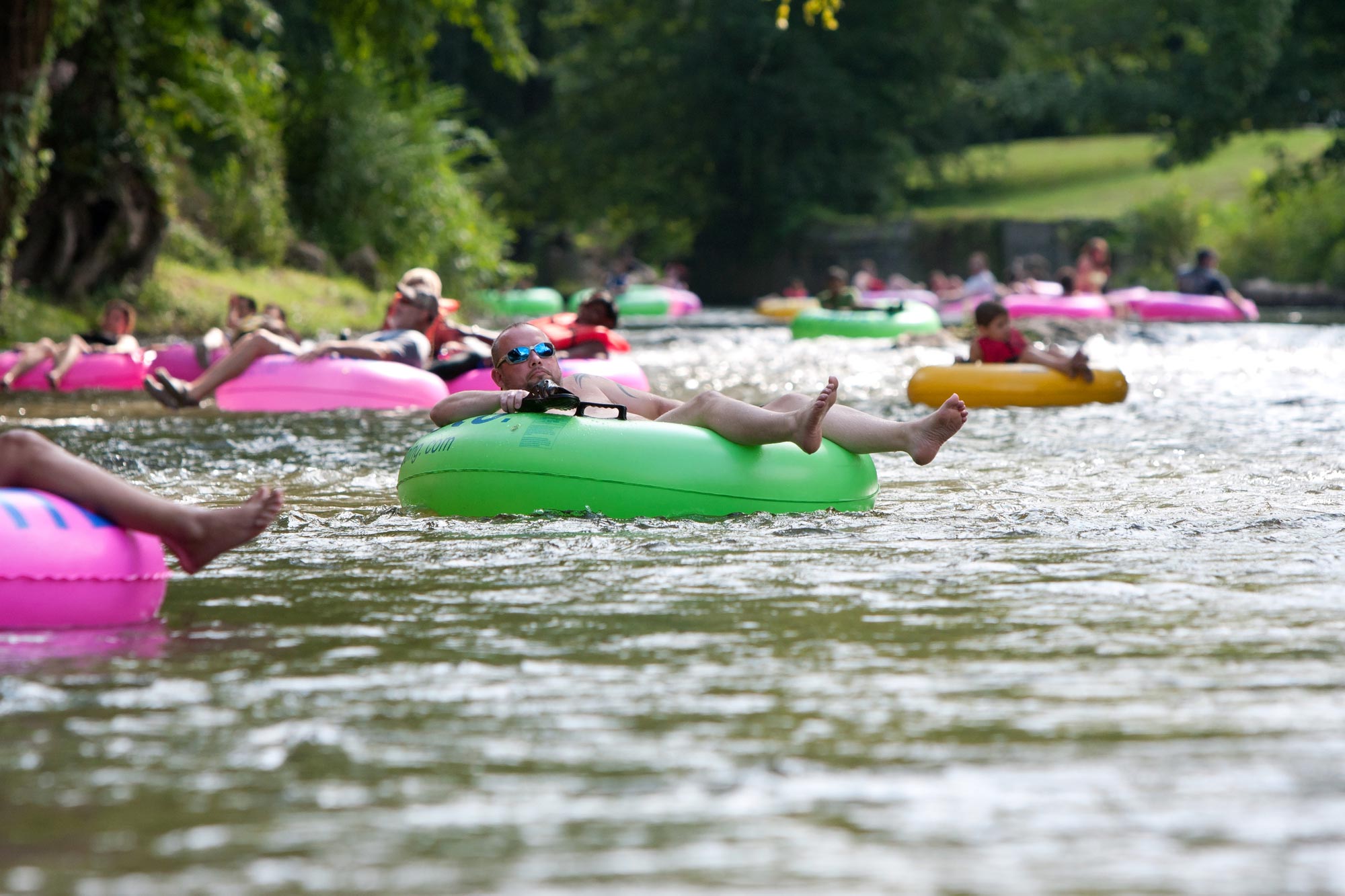 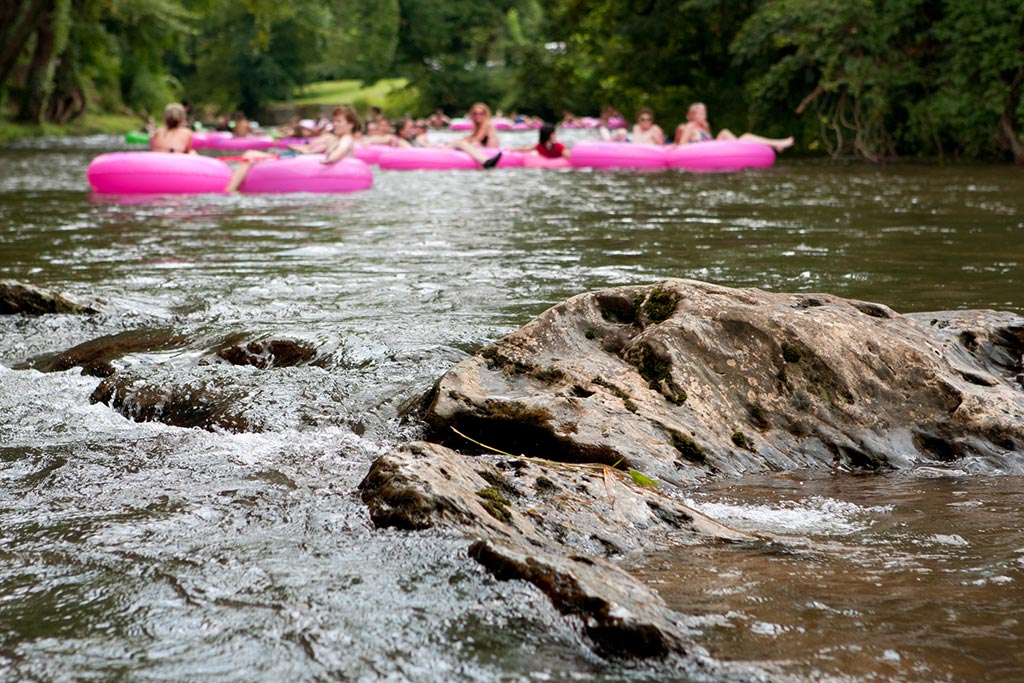 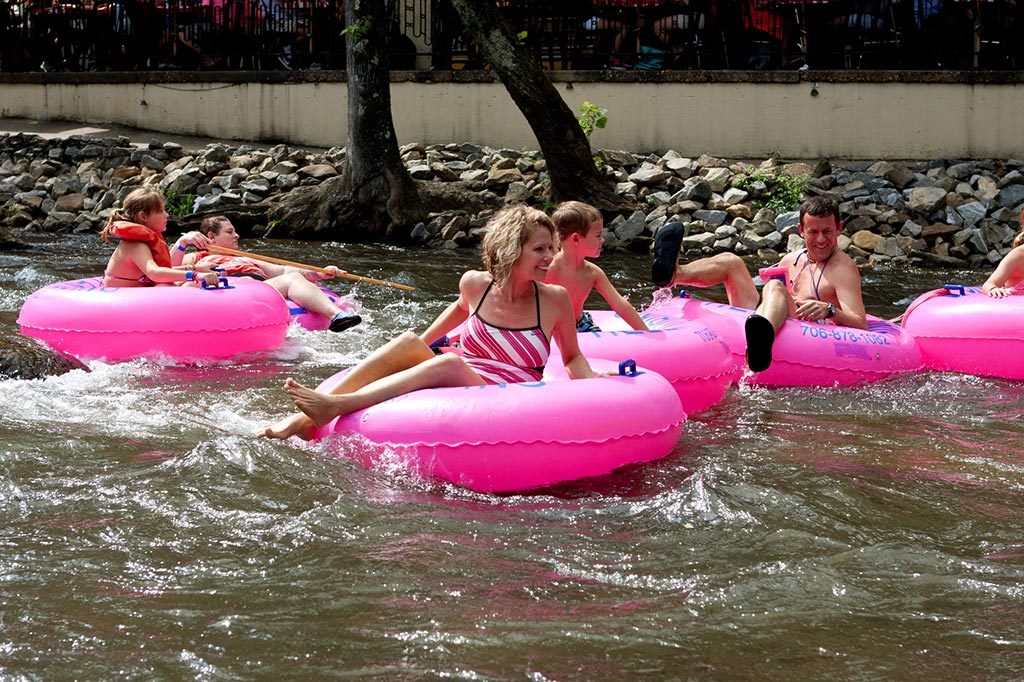 One of the most popular activities in the area is a fun filled float down either of the two rivers in an inner tube, commonly known as “tubing”.  The Guadalupe River runs from Canyon Lake down through New Braunfels, Seguin and all the way to the Gulf of Mexico.  In our area, it is a popular destination for rafting, fly fishing, canoeing and tubing.  The Comal River is the shortest navigable river in the state of Texas in the United States. Proclaimed the “longest shortest river in the world” by locals, it runs entirely within the city limits of New Braunfels. The Comal begins at Comal Springs in Landa Park and flows 2.5 miles until its junction with the Guadalupe.

There are many “Tubing Outfitter” companies in the area.  Both the Guadalupe River and two different tubing outfitters are less than a half mile from Old Mill Resort. 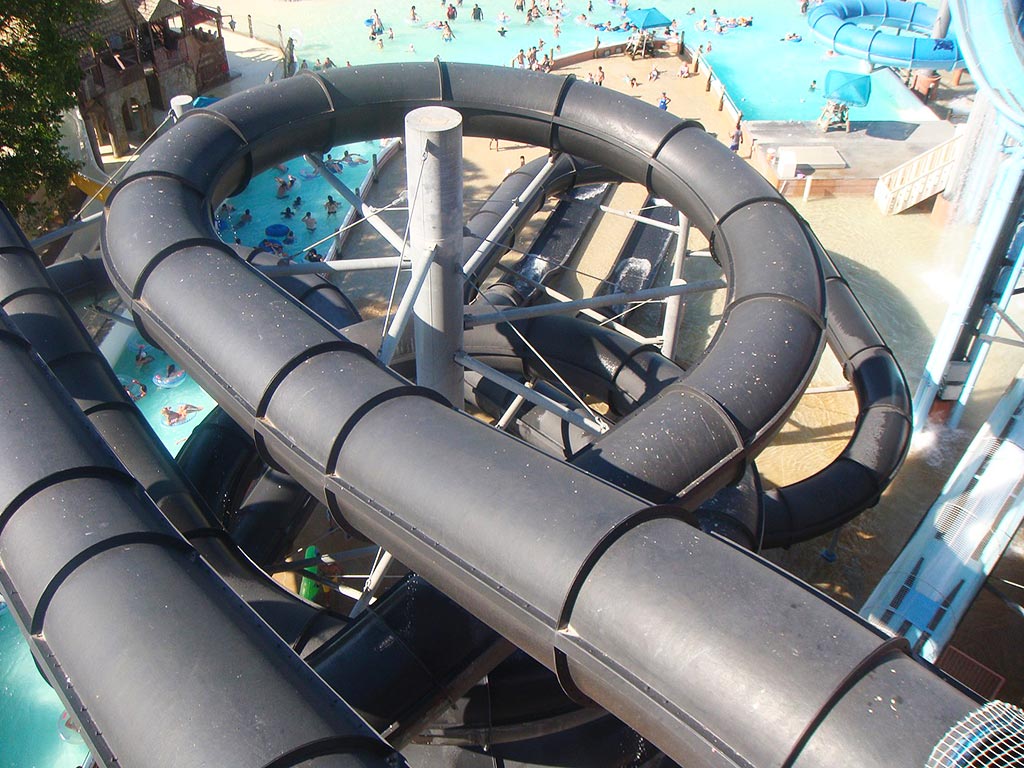 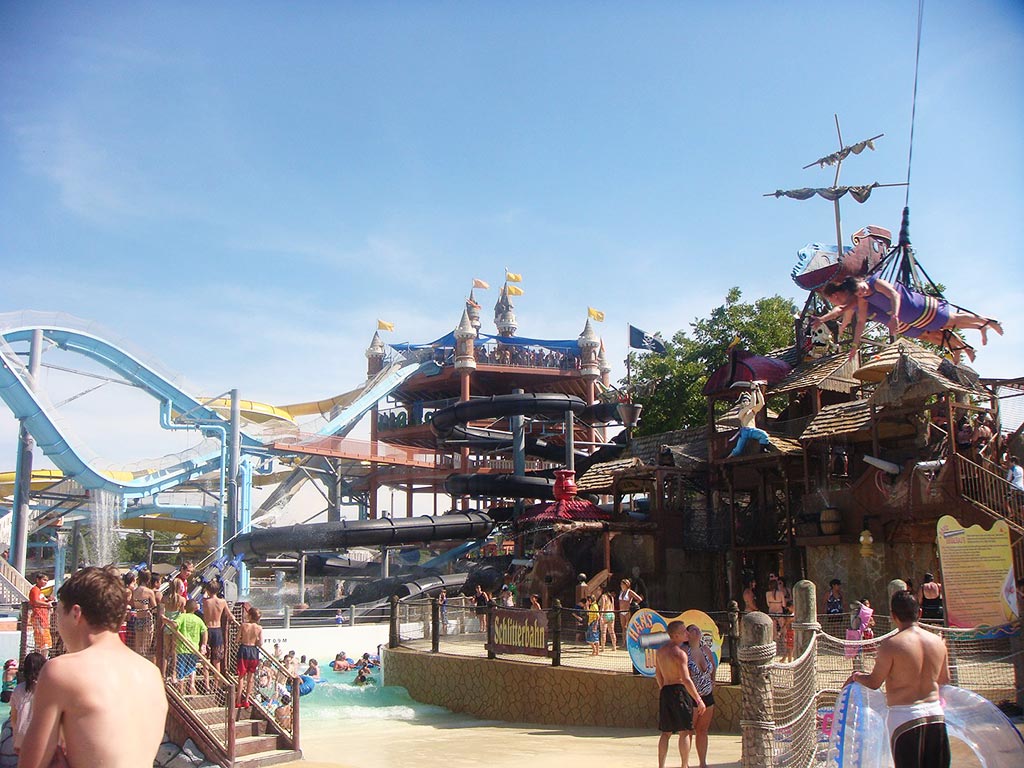 Schlitterbahn has frequently been proclaimed by various publications as the best waterpark in the United States.  Schlitterbahn “grew” out of the banks of the Comal River 40 years ago. It is located in the city of New Braunfels, as is Gruene and it’s just 2 miles from the Old Mill Resort.  Tube chutes, rides, tube slides, and pools use spring fed river water that always stays a cool 72 degrees and flows right back into the river.  Consisting of four waterparks in one, Schlitterbahn features 51 attractions over 70 acres.  You can take your own picnic into the park (food and non-alcoholic drinks) and enjoy an incredible day with family and friends.